Superhero movies have managed to stay fresh by grabbing other genres and sticking superheroes in them. Logan is a Western/ road movie in which half of the characters happen to have knife-knuckles. Winter Soldier is an espionage thriller with some Stark tech thrown in. The problem is that you speedily realize that sometimes the superhero stuff is a totally unnecessary layer, there to get us to choke down the real story they wanted to tell, like the bit of cheese it enables us to get your puppy to swallow his heartworm pills. So can some of these franchises be improved simply by taking out the superheroes? Probably!

Daredevil Would Be More Badass If It Was Just Kung Fu

One of the headscratchingest things about Daredevil is how he’s presented as a man with a disability, and said disability is then immediately rendered moot. Whatever underdog appeal his blindness granted him is gone only because he drank a nuclear milkshake or whatever. He can see audio, his reflexes are like those of a cat tweaking on speed, and the only lingering effects of his blindness are in his garment choices. 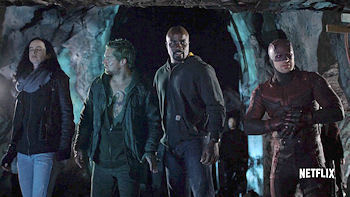 Netflix “How do we seem, guys? All of us in the leather costumes and masks we all agreed to wear? “

Now suppose Daredevil didn’t gain the superhuman abilities that we all secretly believe nuclear waste will award us, and instead was just an exceptional martial artist — you know, the core of any awesome kung fu movie. Now he’s a sightless hero who’s so in tune with his own damn awesomeness that he doesn’t needs to be jack shit, because his enemies’ clumsy punches sound like freight train coming through the darkness. It’s pure skill that allows him to bend like a reed in the wind and uppercut their testicles into their chest cavities.

The addition of superpowers simply cheapens that, which is probably why the Netflix series downplays the “radioactive waste made his ears work better” element so much that it might as well not be there. The only possible argument you could make for why he can’t simply has become a blind badass is that it’s not realistic … and, only, come the fuck on.

Without that arbitrary need to hit all of the standard superhero beats, Daredevil doesn’t even need the silly costume. He can do what Murdock does early on in the indicate, simply covering his confronted with a rag if he needs to protect his identity. The bad guy can still be a ruthless criminal businessman. You can even throw in some ninjas. Not zombie ninjas, regular ones( yes, let’s try one of these stories in a universe in which death is actually permanent ). Make Murdock a guy who trained hard his whole life to overcome the loss of his sight, something he felt was a limitation that he turns into a strength — a tribute to “his fathers”, whom he always viewed as a tough but limited man. He’s a hero merely because his discipline and drive are off the following chart , not because he also got spritzed with radioactive pixie dust during a random traffic accident.

I will preface this whole entry by saying I watched Suicide Squad again in order to write such articles, and I’m exceedingly unhappy about it. The problems with that movie are much more apparent on a second viewing, because your brain doesn’t let you focus on why you didn’t like it the first time. Like Viola Davis’ voiceover during the course of its scene with Harley and the Joker in his shiny shit auto when she says Harley is crazier and more fearless, then 20 seconds later, we watch Harley scream in anxiety because the Joker is driving them off a bridge.

Suicide Squad is such a good notion on paper. It’s a motley crew of thugs and miscreants forced to work together to achieve a noble aim … which immediately falls apart when you introduce the Enchantress ‘ vague and confusing scheme and powers, her weird bobblehead minions, Diablo’s inexplicable plot twisting, and the totality of Killer Croc’s being. Now try to imagine that movie with the stuff you like — some of the characters and interactions, the overall premise — without any of the magical shit. Now imagine everyone in those assless chaps, and what have you got? That’s right, a Western.

You could do a more imaginative Magnificent Seven , with no need to include Joker by Calvin Klein, a guy who fees a goat, or the Enchantress’ never-ending insidious belly-dancing routine. Just a government that has inside information on seriously psychotic brother and sister duo who have an iron grip on a frontier town( or a Mad Max post-apocalypse, if you’re not feeling the Western theme ), killing with impunity, terrorizing the locals, and constructing their own army. Are they strip-mining, cornering the market on moonshine, breeding a superior longhorn? Who devotes a shit — do you even recollect what the smoky magical lady was trying to accomplish, or why?

What matters is that there’s a mess that needs cleaned up, and enough people have already been lost that the authorities concerned don’t want to send in anyone important. Enter our gang of flamboyant outlaws who can use the chance to prove themselves in exchange for freedom, or succumb trying because they’re the goddamn Suicide Squad! A sharp shooter, a firebug, a deformed cannibal, an Aussie outlaw, a samurai, a hot chick with a bat. All of it playing out in wide-open sunny spaces, as they ride through open countryside instead of the dark, claustrophobic, filmed-inside-Hot-Topic’s-butthole movie that we got.( The vistas typify the freedom of the media the characters are trying to achieve !) You can even keep the same casting. Minus Jared Leto.

I recollect buying the first issue of Spawn when it reached the shelves back in the working day, when I had to walk six miles to the comic book store in the snow, while I was on fire and constantly get polio. I bought every Image# 1 when they came out — even Youngblood — because plainly no one was around to warn me not to. And I loved Spawn , thought it was a great book. When the movie “re coming out”, I won tickets to see it opening night and was pretty stoked. Then I watched it, and this entry will be the last we ever speak of such things.

Spawn worked best in comic kind when it get dark. Super dark. And why not, it’s about a soldier who goes to Hell and get enlisted to be one of Hell’s elite. He comes back to Earth in part to hone his abilities, and objective up recollecting who he was and fighting to save his humanity via some good old-fashioned heroism. But also he looks like a bag of charred assholes, he’s got a bit of a bloodlust, and there are people and ogres worse than him everywhere.

Now, I’m willing to keep the “went to Hell” stuff in my version — that’s obviously key to the character — but not the superhero component. It bogs down the movie at every turn. The big, insane cape that had to be CG’d into the movie because it’s like 16 sentient tablecloths sewn together, the goddamn Violator played by John Leguizamo, who’s a little fat buffoon that you can’t are serious about, the supervillain scheme involving an apocalyptic biological weapon … Strip away the comic cliches, and what you have left is a beautiful tale of existential horror.

Imagine being the kind of person or persons tries to be good, but mostly does bad. You get betrayed and murdered like a sucker, and you find out there’s life after death. You go to Hell and then you get spit back up, with no identity , no face save for the barbecue scrotum mask the devil gave you. Now you must piece things back together, years after you died, are seeking to salvage who you are — if you even are you any more — while seeking retaliation on those who did this to you.

It gale up playing out like a demonic possession, but inverted — a good force inside a malevolent one, a human brought back as a ogre, are seeking to fostering and restore the humanity within while his very existence is fueled by a hellish need for revenge. And maybe his nemesis is still a clown of some kind, if that’s important to you.

I had managed to go through my whole life without seeing this movie in its entirety up until I decided to write this, and human did I miss out. This movie is so good. Every scene is so perfectly crafted in a baffling blizzard of bumblefuckery. It’s like art that was somehow made by a drunken elephant shitting into a paint store. But if we’re being honest with each other, it did not work as a superhero movie so much as it worked as a majestic fuckfarce.

There’s no need to feign that any of the “Catwoman” part of Catwoman worked. Just watch that goddamn basketball scene — the weirdly flirty, awkward, and uncoordinated shit dance between Halle Berry and Benjamin Bratt — and that’ll put your mind to rest on that issue. But the central narrative of the cinema is about a low-level nobody stumbling upon grand-scale corporate douchery and then being targeted for a wicked-hard murdering to keep it quiet. Now that’s a movie.

Granted, the thriller wrapped up in a ball of Catwoman yarn is not entirely different from a lot of what passed for engaging cinema in the ‘9 0s — The Net , The Pelican Brief , The Firm . Lots of “The” movies, it was a whole thing. How is this different? Well, Catwoman is supposed to be a thief, and the movie pays very minimal lip service to this briefly, and poorly. But say she is a bandit, and a good one, and it’s in her thieving that she detects the shady business about the company she works at during the day, her cover story undertaking. Now — without magical goddamned cat powers — she’s stuck trying to cover her own ass and uncover the abject shittiness of Sharon Stone.

Essentially, you are able to make the same movie, but take every portion that involved actual cats, douse it in gasoline, and burn it back to the hacker writing Hell from whence it came. Fill in all the holes you stimulated with cat burglar plots and Sharon Stone murdering the Merovingian, and you may well create a cinema that won’t sweep the Golden Raspberry Awards.

If you think you could write a better superhero movie, get a move on it with a guide to scriptwriting from Celtx . If you loved this article and want more content like this, support our site with a visit to our Contribution Page. Please and thank you .