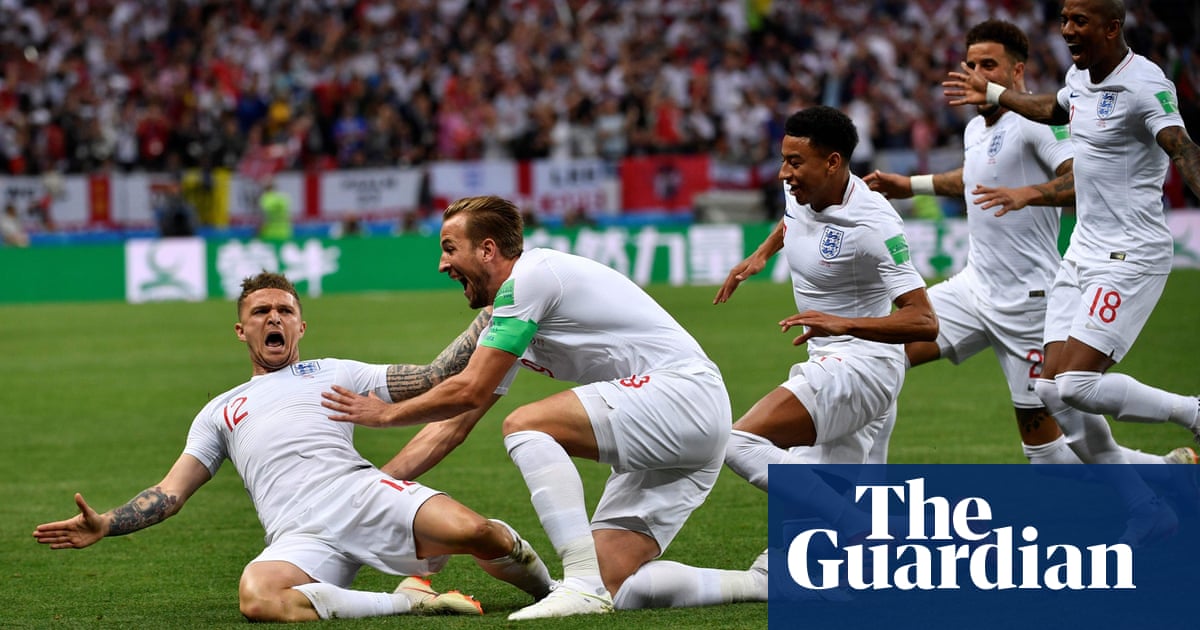 Leave the flags out. Have another glass. Take another seem, if you can, at those moments from Kaliningrad to Moscow when this capable England team played above itself and turned a drowsy, toxic summertime back home into something else.

Let’s not have any anguish this time. England’s four and a half weeks at the Football world cup deserves a little better, even after a 2-1 defeat by Croatia in Moscow that was decided deep into extra time.

Gareth Southgate’s team played to their limits at the Luzhniki Stadium, as they had against Colombia and against Tunisia all those millions of years ago in the midge-mists of Volgograd.

In the end England received a superior adversary here, a squad with deeper gears and with a mania to run right to the end. Croatia came out like warriors in the second half, the craft and winning habits of Luka Modric and Ivan Rakitic starting to intrude like a firm hand on the elbow as video games ticked down.

By the start of extra timeit was a case of counting who could still run. England seemed done, cooked. Harry Kane limped gamely. Jordan Henderson maintained on chugging about like a cavalry captain on a dying pony. Jesse Lingard and Dele Alli procured weird depths of energy, operating on fumes.

The Luzhniki had been full to capability at kick-off, the sun above the lip of the roof fading to powder blue. The crowd was swollen by 10,000 England fans who stimulated it here by lay-overs and nights spent on airport benches, and who pegged out the bed-sheet bivouac at one end, the familiar pageantry of painted flags, a tour of Albion from Exeter to Hartlepool.

With five minutes gone the evening seemed to be heading their style. Alli was fouled on the edge of the box. Kieran Trippier has been getting closer all tournament. As the ball dipped and curled and bulged the net the air seemed to rush out through the roof, then hurry-up right back in as England’s fans basked and bumped and rolled over each other in puppyish joy.

For 20 minutes this felt like England’s game. On the touchline Gareth Southgate seemed pacify, striding about in his waistcoat, stroking his whiskery chin and resembling once again a very clever cartoon badger who drives an old-fashioned car and plays the violin.

Raheem Sterling operated hard but lacked edge. Harry Kane missed a chance he would normally gorge himself on like a starved human. And at half-time and 1-0 up England truly did seem to have one foot jammed in the door for a return to this stadium on Sunday.

Except they didn’t start again after the infringe. Croatia were suddenly driving the game, pressing England back on the flanks, receiving pits that had previously been concealed. The equaliser came from the right, Ivan Perisic sticking a leg up above Kyle Walker’s dipped head to deflect the ball in.

On we went into a bruising, draining extra time. The goal felt like it was coming, even before Mario Mandzukic peeled off the back of John Stones and finished smartly.

And so: exit music.England’s Football world cup summertime is done. How will we recollect those four weeks spent watching Harry and Dele and Harry from the dust of Samara to the semi-detached oddity of Kaliningrad?

There will, of course, be that urge to give all this some wider meaning. It has been an odd feature of England’s progress at this tournament that so many have latched on to the idea of a moral dimension to victory, the notion that England have won matches because their methods are righteous, their hearts pure, and not, say, because Mateus Uribe didn’t reach his penalty kick two inches lower at the Spartak Stadium.

Sport is a chimera, it drags narratives along in its wake. Champions are often blackguards. Losers are often nice. Sport and its storylines are just a decoration, a picture on the wall.

But it can still offer something uplifting. It is hard not to feel part of the enthusiasm for this team comes from a feeling of relief. A lot of young English people have been told for the last few years that times are hard, that their own lives are set one way and that things were always, always better in the past.

Football isn’t real life. It is a separate world packed with hammy emotions and big fat wet notes of drama, always straining to mean a great deal more than it does. But it can provide a little inspiration along the way, another kind of story. England in a semi-final, with a likable team led by the great Gareth, has been precisely this. No tears this time. There is St Petersburg on Saturday to follow. But they are, ultimately, coming home.