Exclusive: scientists find no trace of the Bramble Cay melomys, a small rodent that was the only mammal endemic to Great Barrier Reef 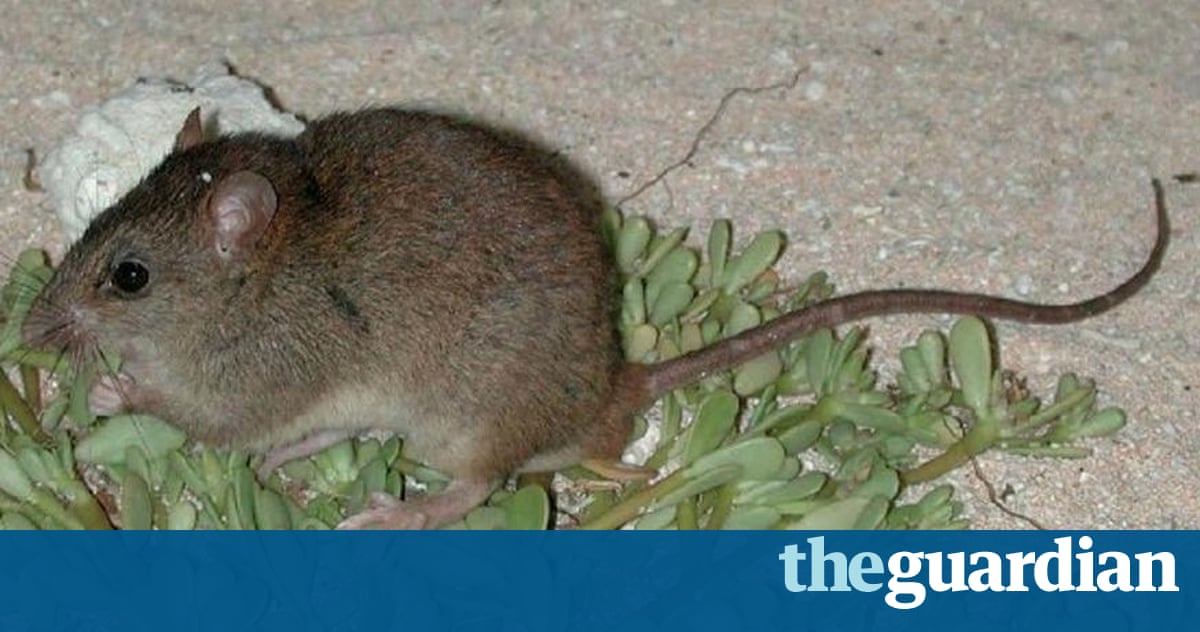 Human-caused climate change appears to have driven the Great Barrier Reefs only endemic mammal species into the history books, with the Bramble Cay melomys, a small rodent that lives on a tiny island in the eastern Torres Strait, being completely wiped-out from its only known location.

It is also the first recorded extinction of a mammal anywhere in the world thought to be primarily due to human-caused climate change.

An expert says this extinction is likely just the tip of the iceberg, with climate change exerting increasing pressures on species everywhere.

The rodent, also called the mosaic-tailed rat, was only known to live on Bramble Cay a small coral cay, only 340 m long and 150 m wide off the north coast of Queensland, Australia, which sits at most 3m above sea level.

It had the most isolated and restricted range of any Australian mammal, and was considered the only mammal species endemic to the Great Barrier Reef.

When its existence was first recorded by Europeans in 1845, it was seen in high density on the island, with sailors reporting they shot the large rats with bows and arrows. In 1978, it was estimated there were several hundred on the small island.

But the melomys were last seen in 2009, and after an extensive search for the animal in 2014, a report has recommended its status be changed from imperiled to extinct.

Led by Ian Gynther from Queenslands Department of Environment and Heritage Protection, and in partnership with the University of Queensland, the survey laid 150 traps on the island for six nights, and involved extensive measurements of the island and its vegetation.

In their report, co-authored by Natalie Waller and Luke Leung from the University of Queensland, the researchers concluded the root cause of the extinction was sea-level rise. As a result of rising seas, the island was inundated on multiple occasions, they said, killing the animals and also destroying their habitat.

For low-lying islands like Bramble Cay, the destructive effects of extreme water levels resulting from severe meteorological events are compounded by the impacts from anthropogenic climate change-driven sea-level rise, the authors said in their report.

Globally, averaged sea level has risen by almost 20 cm between 1901 and 2010, a rate unparalleled in any period during the last 6,000 years. But around the Torres Strait, sea level appears to have risen at virtually twice the global average rate between 1993 and 2014.

Significantly, this probably represents the first recorded mammalian extinction due to anthropogenic climate change, the researchers said in their report, softly published on the Queensland governments website last week.

Although small, the island is significant for many people and animals. It is the most important breeding ground for green turtles and a number of seabirds in the Torres Strait, health researchers said, and has long been visited by its traditional custodians, the Darnley Islanders, who caught fish, turtles and birds.

The authors said the IUCN lists one other mammal that was driven to extinction, partly by extreme weather the Little Swan Island hutia but introduced cats on the island were considered the main driver of extinction.

In contrast, the researchers say the melomys was driven to extinction due exclusively( or mainly) to anthropogenic climate change.

The one hope for the species, the authors tell, is that there might be an undiscovered population in Papua New Guinea. They say the melomys might have arrived on Brambles Cay on rafting debris from the Fly River region of Papua New Guinea. If that is true, then either the Brambles Cay melomys, or a close relative, may still live undiscovered there.

The authors recommend targeted surveys in Papua New Guinea be carried out, to see if they are there.

John White, an ecologist from Deakin University in Australia, who was not involved in the study, said this extinction is the tip of the iceberg. I am of utterly no doubt we will lose species due to the increasing pressures being exerted by climate change, he said. Species restricted to small, low lie islands, or those with very tight environmental requirements are likely to be the first to go.

A report in 2015 found one sixth of the worlds species face extinction due to climate change, and scientists have warned that the world is on the edge of the sixth mass extinction.

Certainly, extinction and climatic change has gone hand in hand throughout the history of the world, he told. So, if this is one of the first, it is more than likely not going to be the last.